Flashback to issue 107 when concept artist and illustrator, Michal Kus shared the pages of his sketches exploring variations of sci-fi vehicles and concepts before he sets about the final render… 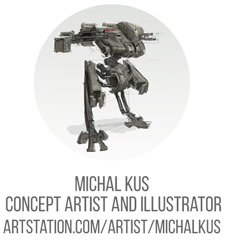 Games and drawing were always my two main passions since I was a young kid. So combining the two was quite easy‒ I did everything to become a concept artist in the video game industry, which was not that easy, I do like challenges though. The key to breaking into the industry was discipline and facing concept art on all fronts in order to become a versatile asset. Although versatile, my biggest love is in vehicle/hardware design; trying to come up with new shapes and forms, and being able to present them in a tight artistic style.

Design wise I focus on a fresh look and coming up with new things. Mixing elements inspired by places out of this world, while keeping it recognizable is a challenge; improvement on that will never stop. 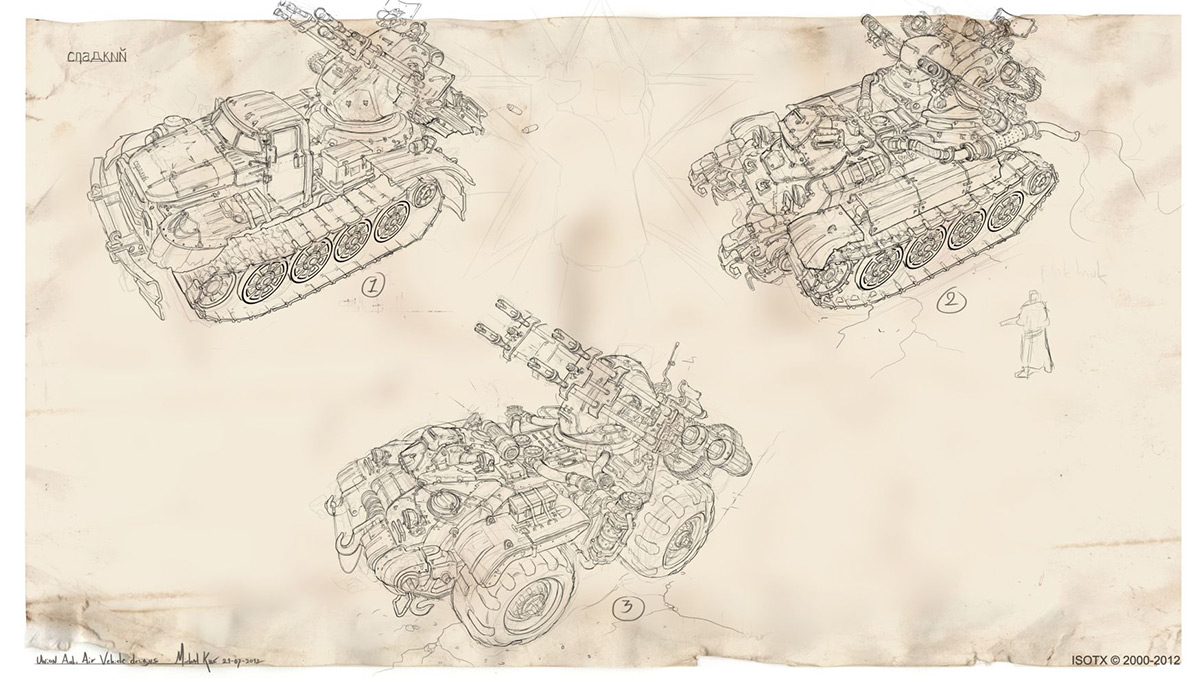 The same WW2 like project but done for the Soviet faction. These are three sketches of an anti aircraft vehicle. Its purpose is the same; however I wanted to have this nice contrast in its appearance. So here we see a truck, a tank and a tractor set up for the same purpose. This is always one of the biggest challenges when doing a lot of variations for a design with the same purpose 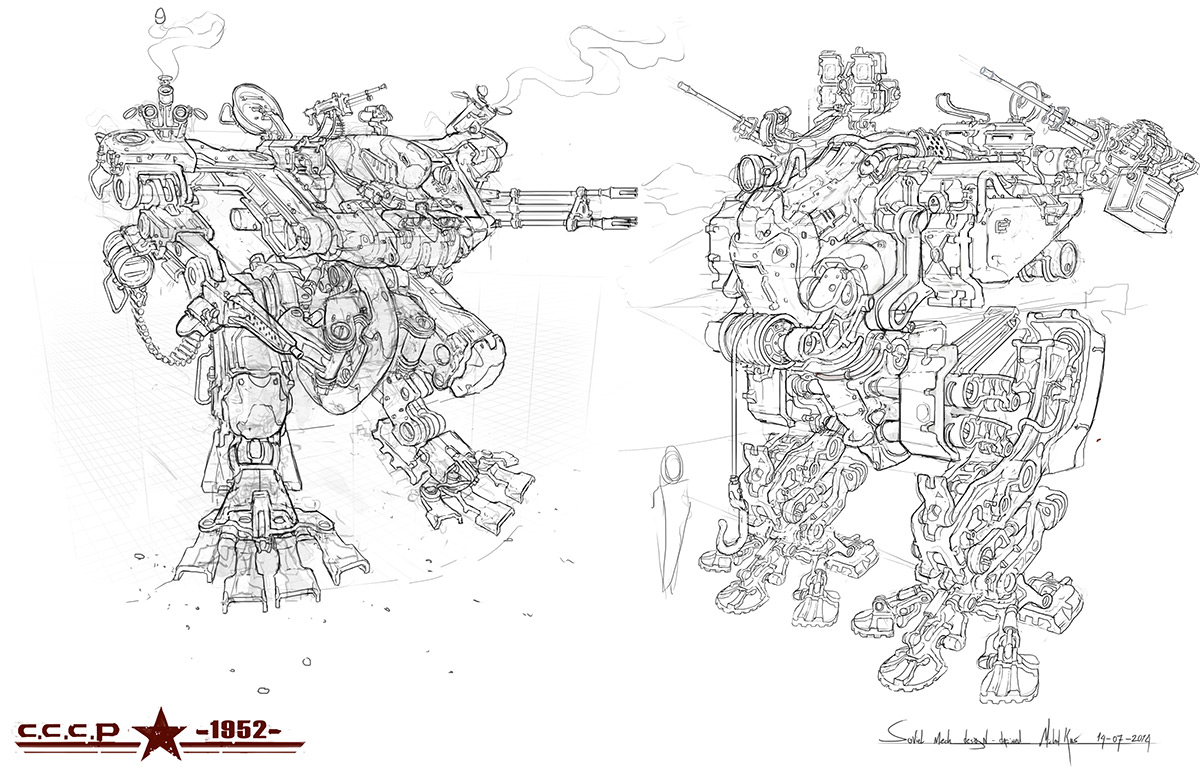 My personal key to success was that I sketch around before I start on the final design. I think it is very important for an individual to break through a certain confidence level and switch your mind set from “pretty drawings” to “exploring a design”. Exploring a design involves research and sketching. You have to train your brain and sketch your way to boost your confidence and creativity. Long story short, personally I think your first sketch will never be as good as your 10th. That is why I sketch. 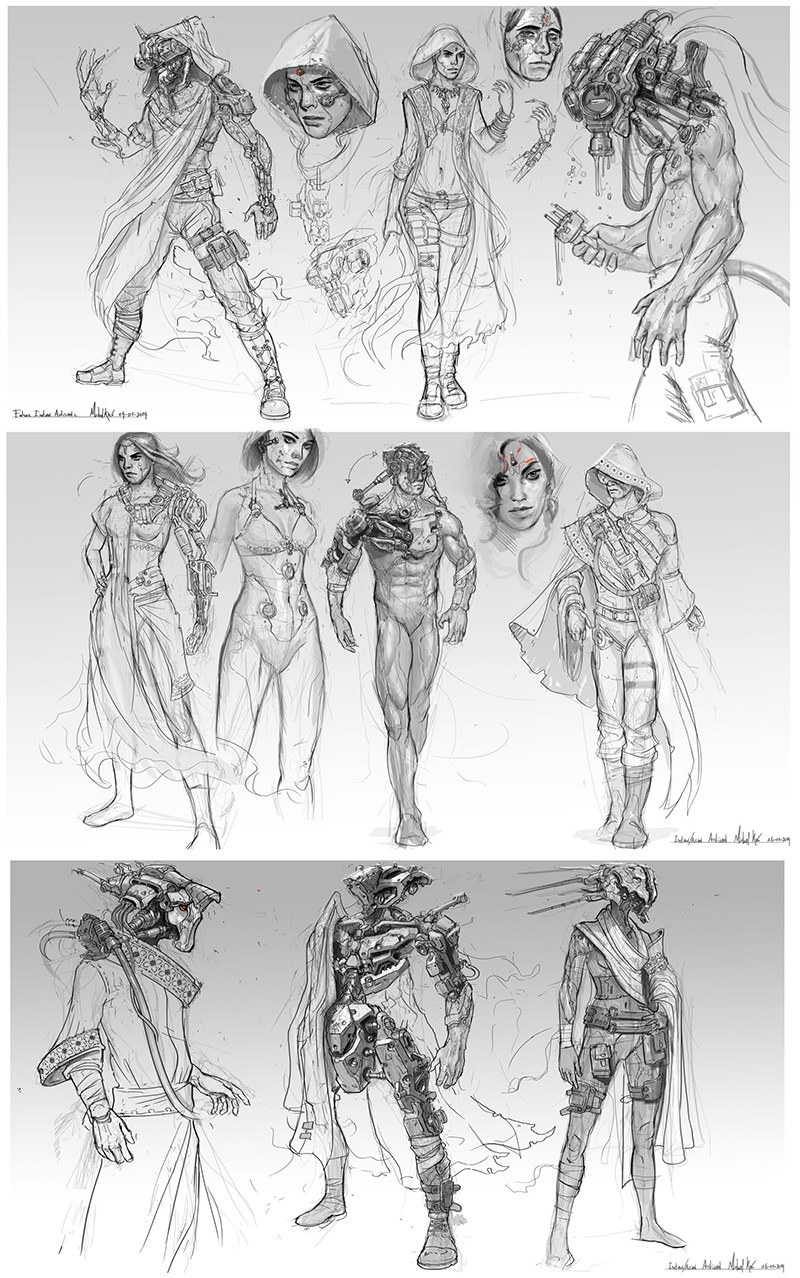 Character sketches done for my own project ‘’Project Verdas’’. Set in a future Asia where India became an empire once again. Sketches depict ideas of how people trade the body parts in order to pursue their artisan profession, with this they also extend their lifetime

Inspiration is all around us. Our own planet we live on provides me, as a concept artist with an unlimited amount of inspiration. My only advice is that when you start being an observer of the world around you, paying attention to everything will open up a new world for you. It instantly triggers the urge to create something new. Sketch out a new design based on some cool stuff you saw in the morning or the way the sunlight was bouncing from a certain object. Other than that I recommend a lot of books and movies, but that list would be too big. 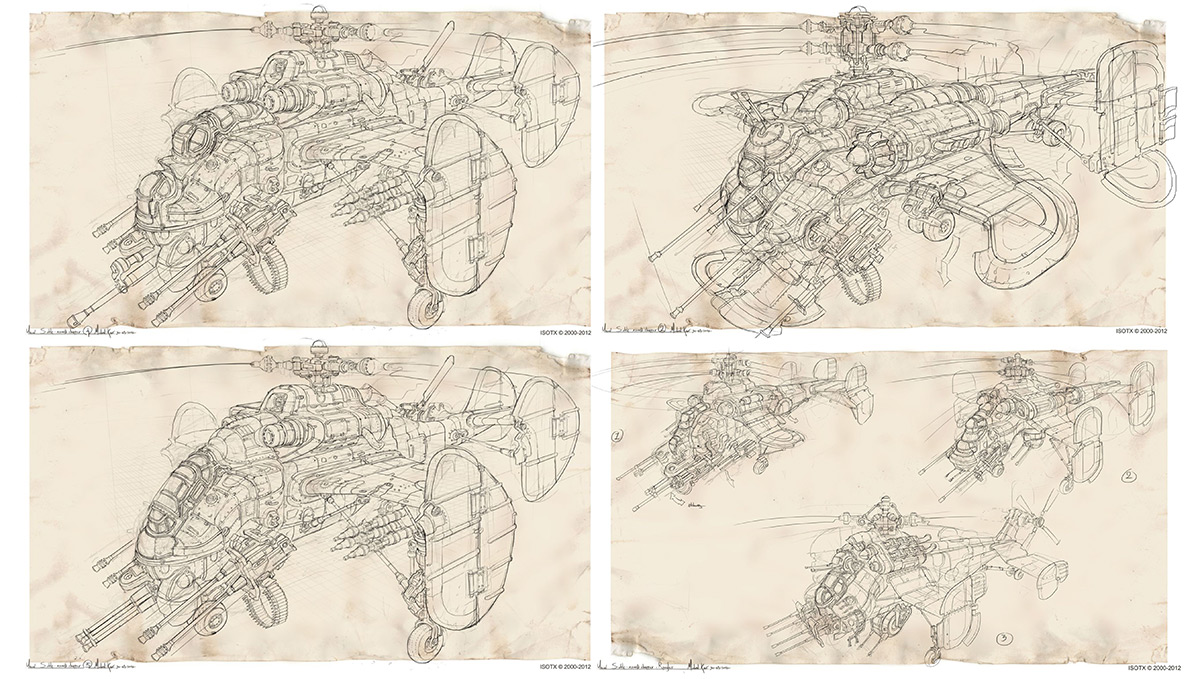 The alternate WW2 setting I was working on took place in a world where the war waged longer than in the real world. WW2 boosted our technology overall. What if the Second World War took longer than 10 years? I think personally it is quite possible choppers would be around late 1940’s, early 50’s and actually make it into mass solid production ISOTX © 2000-2013

Most of the time I sketch and doodle digitally on my Wacom intuos 4, it is fast and efficient, it also provides me the possibility to reuse certain forms I sketched before. I do sketch traditionally once in a while, but that is when I don’t have access to digital media. 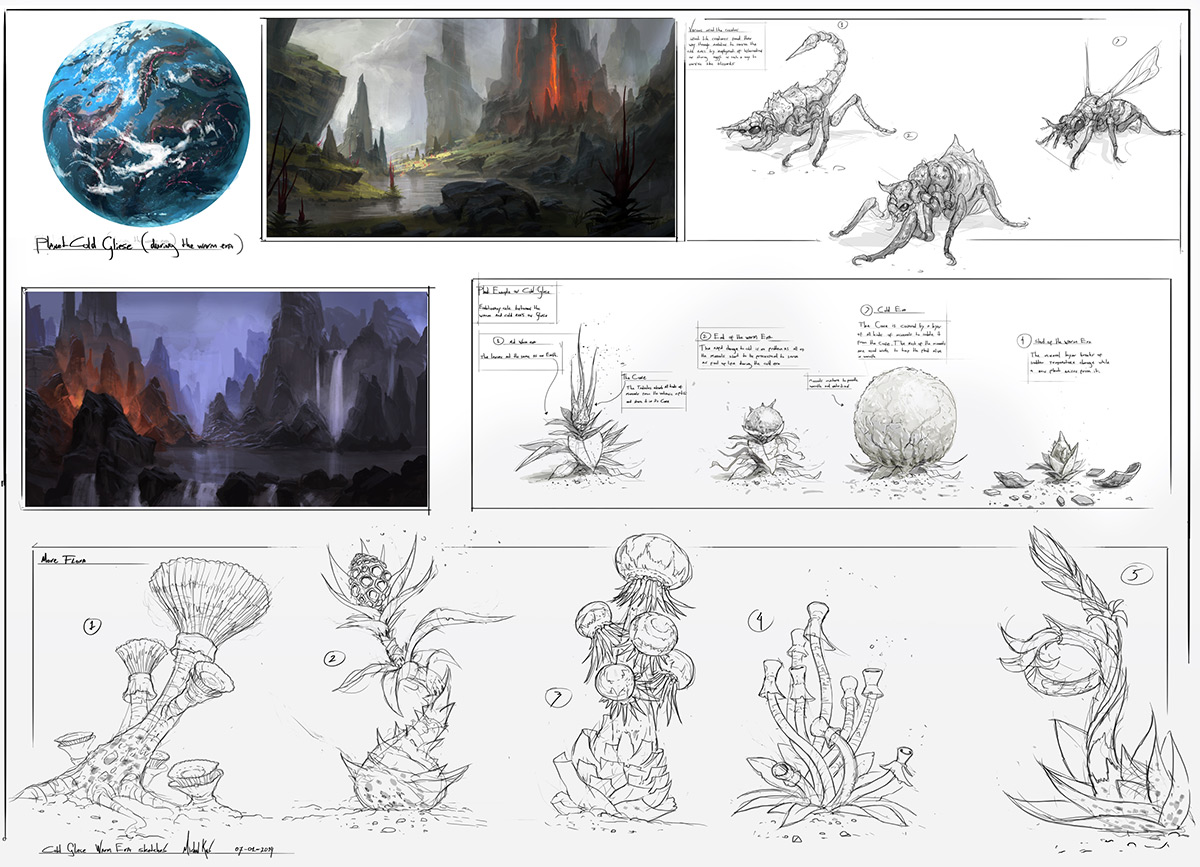 Exploring a planet with a warm and cold cycle caused by frequent global volcanic activity. This sheet shows some flora and fauna as well as some landscape sketches of how the planet looks during the warm period

Being creative is a prescription

Personally I think creativity is the most important. Sketch a lot and your flow of creativeness will turn into something that is a part of you as a being. It is vital you train your brain to see forms out of this world and arrange them in a different way. That is basically what creativeness is. The challenging part is to pick up and see the forms from our world and arrange them in a cooler way then execute it professionally by drawing with confidence. Sketch a lot and your brain will adapt to it. 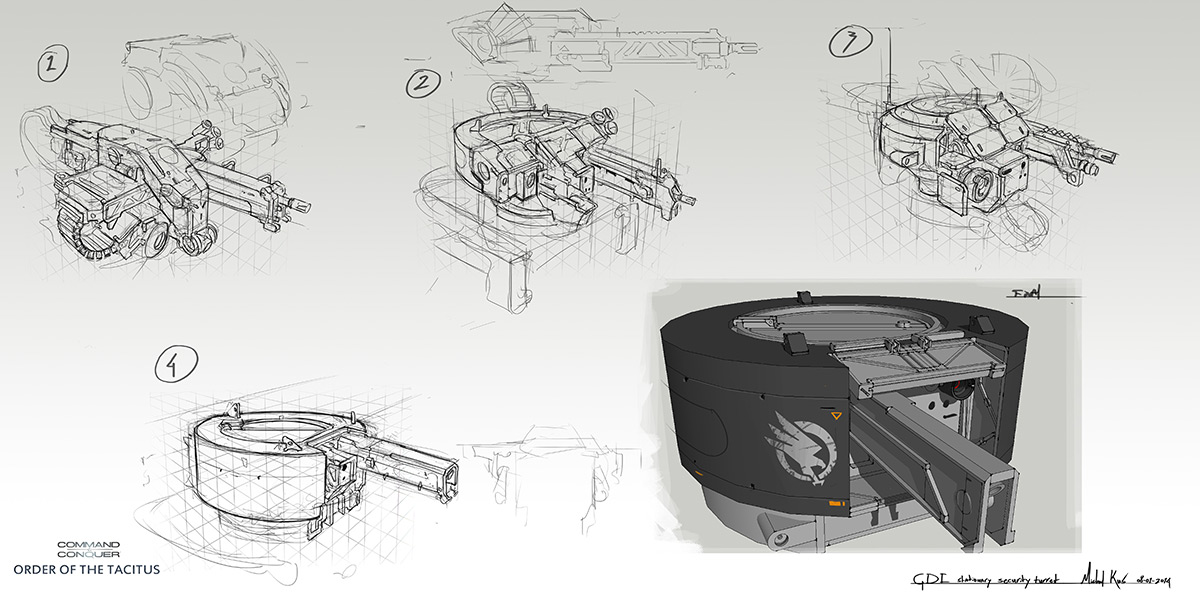 Exploring a design for a versatile security turret. Well armored and reasonable fire power. I was trying to keep the major shapes simple and chunky

Sketches of a next generation light tank