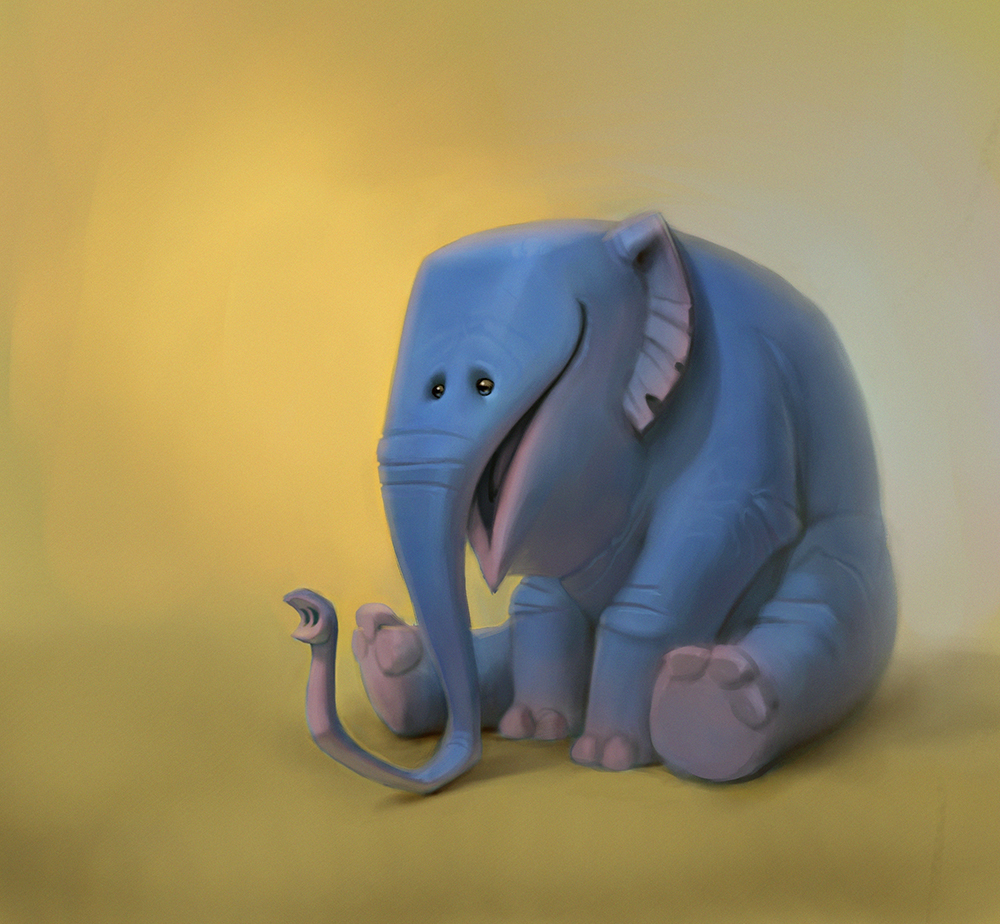 Disney Interactive concept artist, Sam Nielson chats to 2dartist shares some industry advice and talks about his journey into the industry in this archive interview! 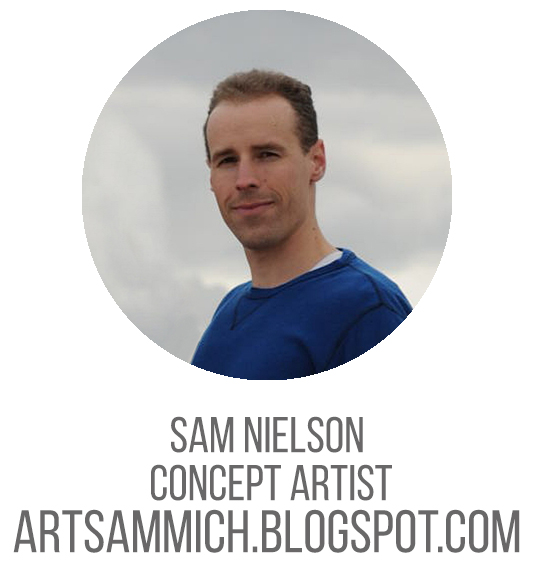 Sam has worked on game and toy concepts for Disney Infinity and also teaches at Brigham Young University and Schoolism.com. His clients include Harper Collins, Scholastic, and Blizzard Entertainment.

From his first forays in to the world of game art with his older brother, at the tender age of 16, Sam Nielson has gone on to become one of the artists at Disney Interactive Studios, and now trains great young creative minds at Brigham Young University.

Inspired by the pixel-painting and anti-aliasing of the Nintendo era, Sam began to develop an interest in digital art software. Years later, he encountered Painter and Photoshop and began to really focus on the rendering techniques, learn traditional art techniques and work his way up through to the prestigious position he now holds.

How did you get into the industry and land a job at Avalanche software/Disney Interactive Studios? 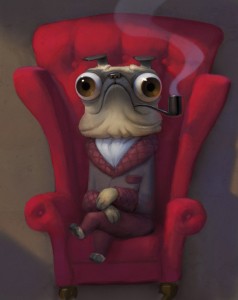 When I was young, my older brother and I started making games together. He did most of the work, butI helped out with the art. In 1994, I submitted a game we’d recently finished as a portfolio piece to a small game studio called Saffire. I was 16 years old and I don’t think they found the art very impressive, but they were impressed that we had made a playable game at such young ages, so they decided to give me a chance. The artists that worked there were incredibly generous with their knowledge and they taught me how to be a passable artist. In 2004 I was hired by Avalanche Software. About a year after I started there, the studio was bought by Disney.

What was it about the digital tools that made you want to pursue a career in the industry?

I started in the era of the Super Nintendo, and I was fascinated by what you could accomplish with pixels. My first job was to pixel-by-pixel anti-alias the spokes on a motorcycle drawn by another artist, and I thought I had the coolest job in the world.

Years later, when I saw artists using Photoshop and Painter for the first time, I was excited at how the complicated task of rendering form and detail could be so quickly accomplished using those tools. Painter interested me the most because it seemed so organic compared to the tools I was used to. I was only later trained as a traditional artist and found ways to reverse-engineer that knowledge to the digital tools.

Can you talk us through what a normal day like in the studio?

I’ve been assigned to concoct a daily exercise for our concept team, so the first thing I do when I get into work is look for some inspirational image or a design warm-up task.

Once I’ve done my own take on the exercise, I get an assignment from our department head, Sebastien Gallego. Most tasks require extra information, so I’ll go to the other teams involved in that concept and gather what I can. I ask them for requirements and limitations, but what I’m really looking for is a leaping off point, something that captures my imagination or inspires an interesting juxtaposition of ideas for the concept.

Sometimes a task is automatically interesting, but most of the time it’s just a box of creativity-crushing, pre-defined rules, so I look for that interesting toehold, but sometimes I have to push back against the rules when I don’t see a way to make the thing interesting. This can be tricky because nobody wants to hear that their idea is bad, so I have to phrase my concern in terms of the conflict the idea creates, or I sometimes boil their idea down to its essential elements and ask them if I can find another way to solve that problem.

I try to not ever start drawing until I am inspired by a task. That usually means Google searches and visual brainstorming, but on a quick deadline I sometimes have to bounce the idea off other artists and see if they can pull something interesting out of the idea within a short conversation. Our studio is very collaborative, so I get a lot of help from other artists throughout the process, including critiques and draw-overs. The art directors usually review concepts the following morning.

Being a concept artist means that 90% of my images are rejected, but if I don’t invest myself emotionally in every piece, it starts to show and my works suffers. So I have to find a balance between a carefree attitude where I enjoy the work for its own sake, and that focused intensity where I care about each piece as though its approval is essential. It’s not an easy line to walk. 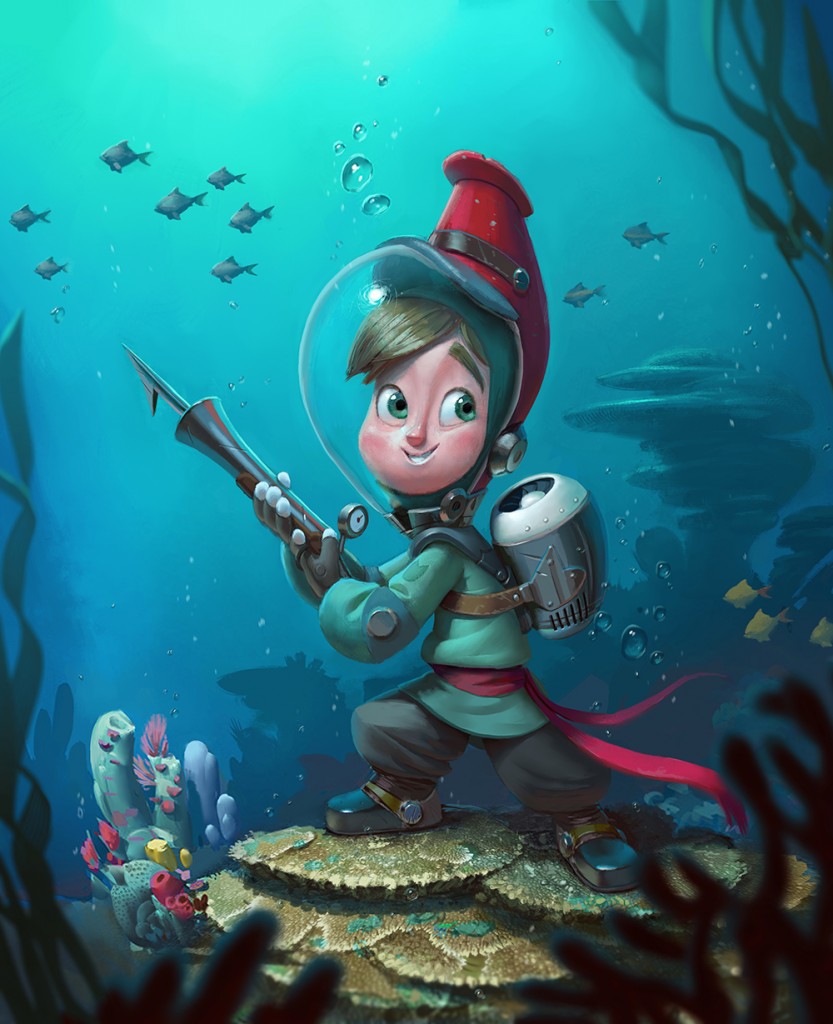 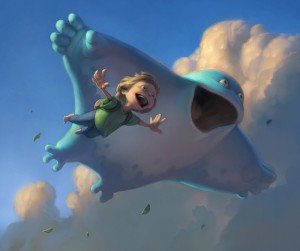 Could you tell us about your creative process and the software that you use?

I like to draw, but I don’t like drawing when I’m doing concept art. I can’t be satisfied with a design until I’ve addressed the issues of form and color, so I usually start with rough sketches and refine the drawing while I paint it. I used Painter for my digital painting until less than a year ago, when I switched completely over to Photoshop. I miss a few things from Painter, but I had more frustrations while using it than I do now with those few things I miss from it. 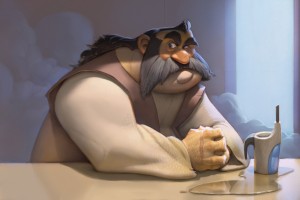 You teach an advanced lighting course at Schoolism, where did you learn the science behind this and do you have any tips for artists looking to improve?

I have no academic qualification, just a fascination with all things scientific. I married into a family of physicists, and my wife insisted that I go to college even though I was doing well in my career. Something about my association with her family stuck with me even though I was an animation major, so I devoured anything I could pick up in physics, astronomy, and even 3D art classes on how light interacts with different materials. When Bobby Chiu asked me to teach the Schoolism class, I spent many months collaborating with my brother-in-law, whose doctorate project at Penn State happened to be dealing with light. I also read as many books and scientific journals on the subject as I could find with the goal of making the deepest and most interesting class possible. I’m still finding new knowledge all the time, so it has become a continuous search to understand what is an unexpectedly deep subject.

it seems like I find a new artist to be influenced by every day and I’m positive I couldn’t list them all here.

Where do you draw your influences from?

My early influences were comic artists, but I’ve really leaned away from those influences in recent years. My more recent roots come from my Avalanche training at the hands of Ryan Wood, Dave McClellan, Todd Harris, Joe Olson, and Jon Diesta; with additional inspiration coming from the concept and visual development teams at Disney Feature, Pixar, Dreamworks, and Sony Animation. However, it seems like I find a new artist to be influenced by every day and I’m positive I couldn’t list them all here. 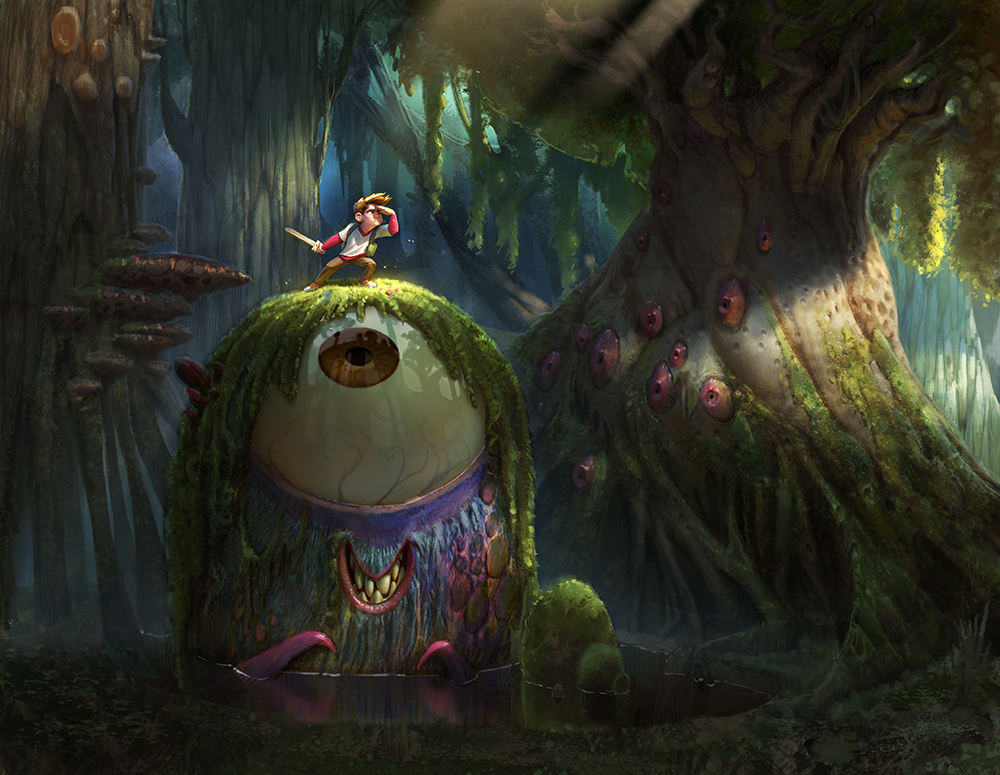 What has been your favorite project that you have worked on to date?

I loved working on Chicken Little: Ace in Action. It wasn’t a very prestigious game, but that was what made it great. Nobody seemed to care about the project, so we were left almost completely alone to come up with the game we thought would be fun. I was the lead concept artist so I was able to collaborate closely with our talented team with almost no oversight. All the coolest titles I’ve worked on were a pain to pull off because we had to cater to so many different people just to get anything approved. Ace in Action was just pure fun. 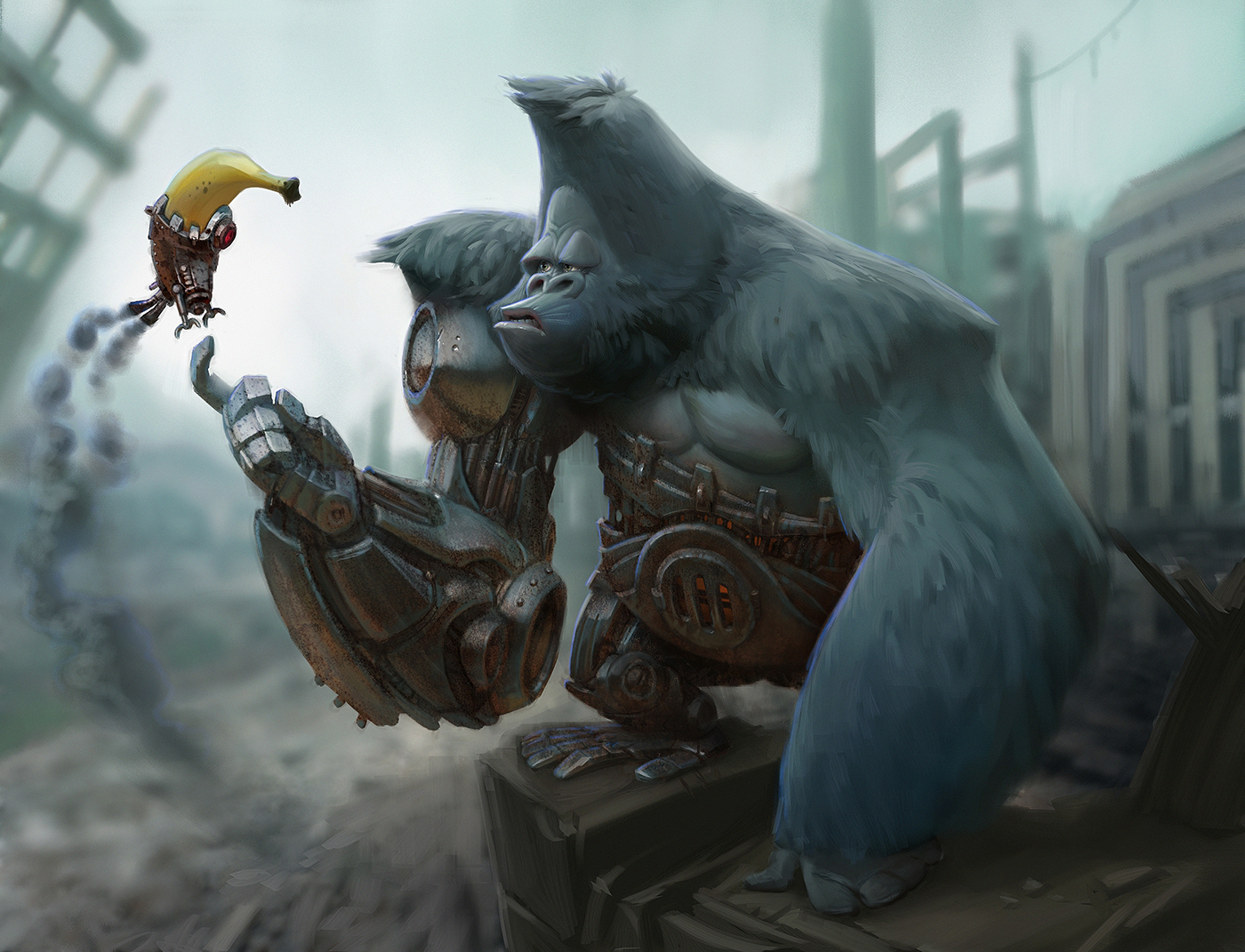 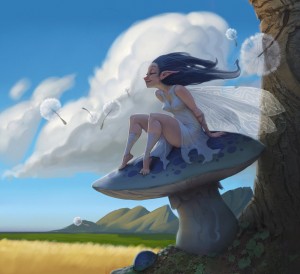 Do you have any advice for anyone wanting to start a career in the industry?

Don’t get cocky, but don’t get discouraged either. The perfect artist is willing to find out exactly where he or she needs to improve, but believes in himself or herself enough to keep trying even when there’s so much to learn.

I’ve known way too many talented artists who get full of themselves and stop looking for ways to get better or stop listening to people who critique their work. And I’ve also known many artists who just get down on themselves and stop trying. If you’re going to make it in a difficult industry, you need to be confident enough in your ability to improve that you will be humble even when you don’t want to be. 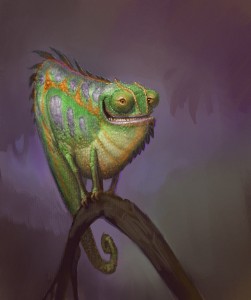 Can you tell us about any projects you are working on at the moment or what you have coming up in the future?

I can’t even show some of the concepts I’m working on to my own team, so I definitely can’t talk about it yet. Sorry!

Working for a big company such as Avalanche software/Disney Interactive Studios is a dream for a lot of emerging artists, could you give any advice on tailoring portfolios and what these companies are looking for?

Submit art that is similar what we do. Gore, sex, or pensive expressionism merely tells the art director that deep down you don’t want to work on Disney stuff. We want people who would love to work for Disney and who are comfortable approaching content and style the way we do. Of course we want to see something new, but do something new in a way that suggests you’re going to add to our team rather than try to pull us somewhere we don’t want to go. Also, while energetic design is a must, construction is still huge. Even cartoony characters need to have weight and structural consistency. 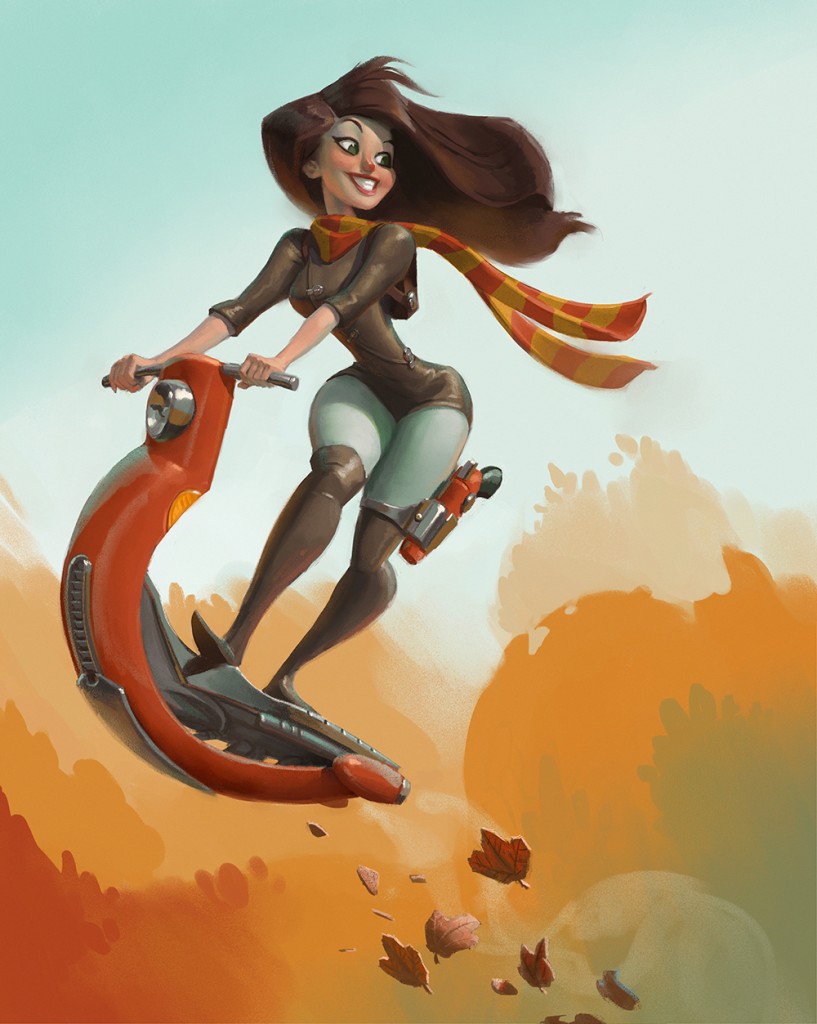 When you aren’t working on digital art and concepts, how do you enjoy spending your time?

I have a lot of kids now, so I spend any extra time I have doing things with my family or helping kids with schooling. Outside of art I don’t have a very exciting life, but it’s a very fulfilling one.

Thanks for taking the time to chat with us today!